Most of co-generation are coal based power plants. Biomass co-firing provides a relatively low-cost means of increasing renewable capacity, and an effective way of taking advantage of the high thermal efficiency of large coal-fired boilers.

What is Biomass Co-firing? 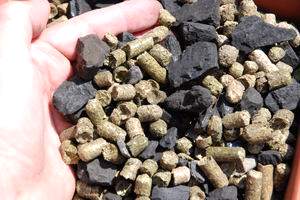 a) Direct co-firing: The biomass is burnt directly in the existing coal furnace. Direct co-firing can be done either by pre-mixed the raw solid biomass (generally in granular, pelletised or dust form), with the coal in the coal handling system or by the milling it and directly injecting it into the pulverised coal firing system.

b) Indirect co-firing: The biomass is first gasified before the resulting syngas is combusted in the coal furnace; and

c) Parallel co-firing: The biomass is burnt in separate boilers, with utilization of the steam produced within the main coal power station steam circuits.

One of our power plant boiler project: CFB steam boiler for paper plantwas designed to burn coal mixed with rice husk to reach a high thermal efficiency of 83%. Biomass rich countries would like to use the biomass fuels like rice husk, wood pellet, bagasse, palm oil kernel, straw and co-firing with coal in the power plant boiler. Nowadays biomass co-firing power plant boilers are installed worldwide.

Previous: How to Prevent Autoclave From Leakage
Next: How to Inspect Industrial Boiler Economizer
Back
Products Recommended