Fluidized bed combustion boiler produces steam in sulfuric acid production process. Sulfuric acid is one of the most important compounds made by the chemical industry. It is widely used in metal processing for example in the manufacture of copper and the manufacture of zinc and in cleaning the surface of steel sheet.

Sulfuric acid production process is an exothermic reaction, for a satisfactory yield of sulfur trioxide, as low a temperature as economically possible is used. Thus, heat is removed from the gas leaving each bed using fluidized bed combustion boiler.
Manufacture of sulfuric acid 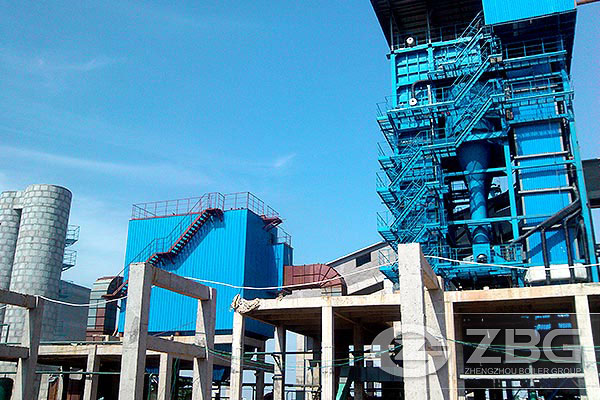 The process for producing sulfuric acid has four stages:

In the process of conversion sulfur to sulfur dioxide, if sulfur is the feedstock, it must first be converted to sulfur dioxide. Molten sulfur is sprayed into a furnace and burnt in a blast of dry air at about 1300K(1026.85℃). The sulfur burns with a characteristic blue flame:

As excess air is used the emerging gas contains about 10-12% sulfur dioxide and 10% oxygen, by volume. The gases are very hot and so are passed through fluidized bed boilers. The gases are cooled to about 700 K(426.85℃) and the water in the surrounding boiler pipes is converted into steam. In manufacturing one tonne of sulfuric acid, one tonne of high pressure steam is also produced.

To know more about fluidized bed combustion boiler in sulfuric acid production process, please contact with us for free. ZBG has 24/7 consumer service online system, any question about our industrial boiler is welcomed.